Pirates Win Back to Back Championship Games 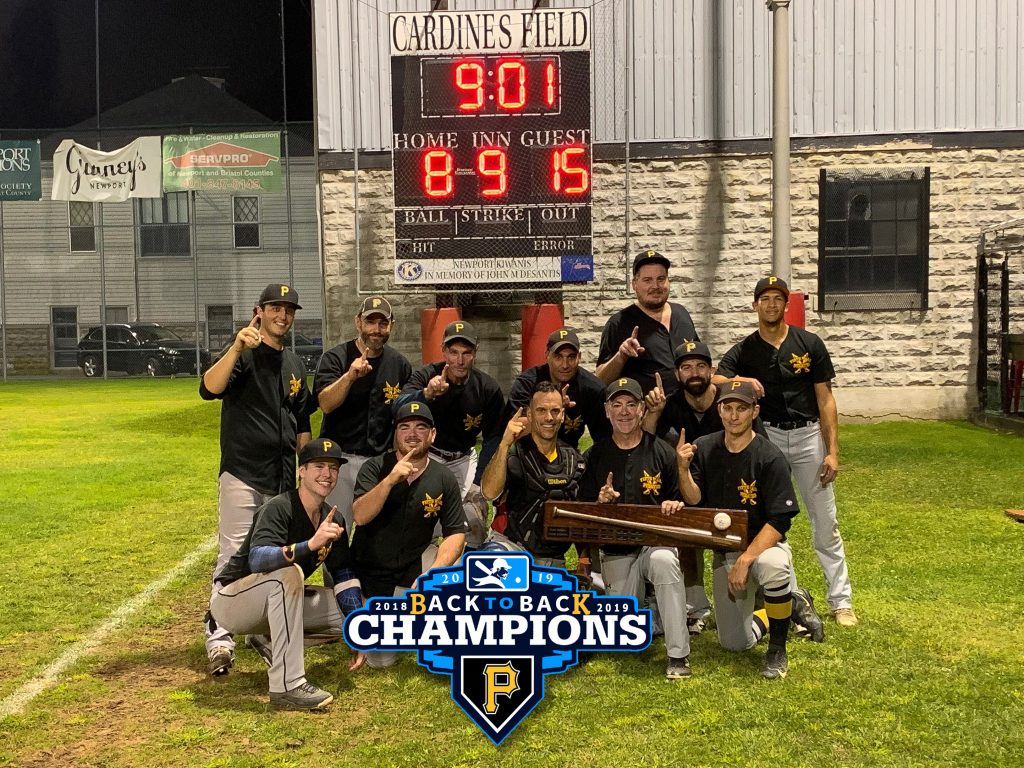 On September 14th, 2019 at Cardines Field in Newport, RI, the Fifth Ward Pirates (7-7) capped off an impressive 6 game win streak to close out the season with a 15-8 win over the Newport Storm (12-2) to repeat and earn their 3rd IBL championship trophy.

It was a rematch with Storm rookie pitcher Ryan Baldwin taking the bump against the surging Pirates. His last two starts vs. the Pirates, he combined to strike them out 25 times. For the Pirates, Teddy Horan took the mound with a regular season 2.24 ERA and having great consistency through the playoffs. The Storm was filled with league award winners as Ryan Baldwin took home the Outstanding Pitcher of the Year and Team MVP award. Charles Aboyoun, Sr. won the Heart and Hustle Award for the third time. Ely Estives won the Gold Glove award for the first time. Jimmy Costakos took home the Manager of the Year Award. For both sides, it’d be a test of wills, defense, and plate discipline to win it all.

The game started off quickly with the Pirates jumping ahead 2-0 with singles from Teddy Horan, Dylan Smith, Scott Emond, and Kevin Rinaldi-Young. The Pirates were not ready to mess around, but neither would the Storm. After a shutdown first inning from Teddy Horan, striking out two, the Storm bounced back for 5 runs in the bottom of the second, thanks to a Jimmy Costakos double, a walk to Brian Maher, and RBI singles by Ely Estives, Jeff Oberg, Jared Harootunian, and a Paul Dumas fielder’s choice. The Storm continued the barrage with John Hanks reaching on a walk, but was cut down at second on Josh Brocu’s. Jimmy Maher would single, followed by a Costakos walk, and a Duprey fielder’s choice to score Brochu for the Storm’s 6th run. The Pirates gained some ground in the bottom of the third bringing it to 6-4 after Dylan Smith’s 2-run double bringing in both Terry and Teddy Horan. The stadium would go quiet in the 4th as the Storm’s Ryan Baldwin and Pirates pitcher Austin Martin kept it scoreless.

The Pirates crept back in the top of the 5th inning as Mike Cecchi and Alex Dresser got on base and advanced to second and third with the Captain, Terry Horan, up to bat. He came through with a clutch 2-run single to left field to bring in Cecchi and Dresser. Robbie Harrington would add to the fireworks to put the Pirates up 7-6. The Storm would ensue the scoring with a 2 run single from Ely Estives to left, bringing in Costakos and Duprey to go up 8-7. Pitcher Devin Johnson ended that rally with a strikeout in the 6th and Baldwin capped off the 7th inning striking out two Pirates.

At 8:15, a brief rain fell, but the Pirates would weather the storm and retake the lead. Alex Dresser would start with a leadoff walk followed by a hit and run by Terry Horan. Devin Johnson walked to make it a bases loaded situation and it was time for the Pirates to strike. The Storm got a needed out when Dresser was forced out at home, but Teddy Horan reached first to keep them loaded. After two consecutive 2-run singles from Dylan Smith and Team MVP Robbie Harrington that would clear the bases the Pirates Scott Emond and Kevin Rinaldi-Young both would reach on errors. Emond and Rinaldi-Young would then cross home plate with the help of Sean McElroy’s single to left. With Matt Marin reaching on a fielder’s choice, Catcher Mike Cecchi shot a would-be single up the middle, but a quick grab from Baldwin would end the Pirates rally. The 6-run explosion put the Pirates up 14-8 with the closer Dylan Smith ready to work.

With the Pirates scoring one in the top of the 9th. The bottom of the 8th and 9th inning saw an impressive 6 K performance from Smith to close out the game and lead the Pirates to their 3rd World Series trophy. Through thick and thin, both sides came back in situations and were relentless in their playing. This capped off a successful 2019 campaign for returning vets and rookies experiencing the league for the first time. With a youth movement focus this season, the Island Baseball League saw their numbers and talent increase, which led to an exciting championship game. The 2020 season is just around the corner, with both teams already gearing up to get back under the bright lights of Cardines Field.